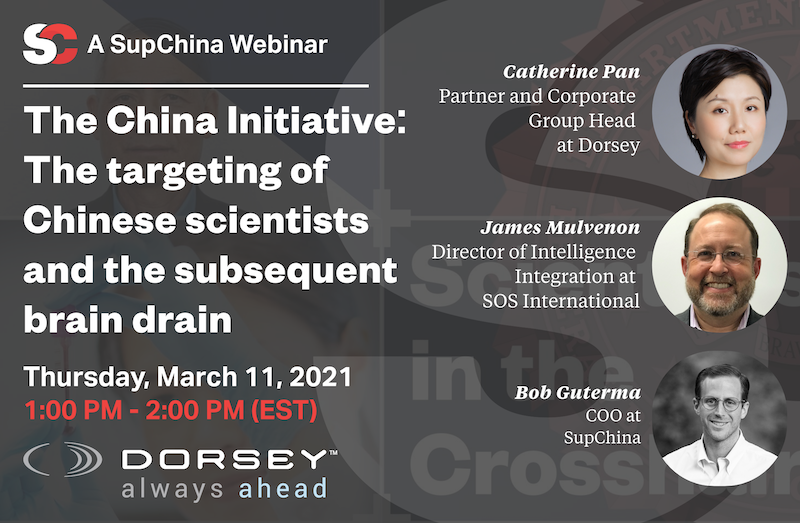 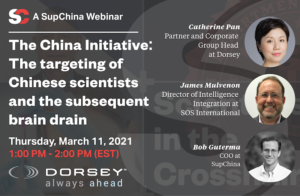 A video screening and panel discussion about the consequences of the U.S. government’s China Initiative and its future under the Biden administration.

On November 1, 2018, Jeff Sessions, then the U.S. Attorney General, announced the China Initiative, a program designed to combat Chinese espionage from “non-traditional” collectors. Many Chinese and Chinese-American researchers feel that the program has placed a target on their back, and that they are being unfairly targeted for their Chinese ethnicity. There are also critics who say the Initiative has done little more than drive talent away from the U.S.

This event will consist of a screening of a video produced by SupChina about the China Initiative and will then be followed by a panel discussion with guest speakers with exclusive insight into the initiative and its impacts.

Catherine X. Pan-Giordano is Partner and Corporate Group Head of the New York office at Dorsey, a firm that has represented some of the individuals that have been impacted by the initiative. As the Co-Chair of the U.S.-China practice, she will share some of the pain points the initiative has caused and how there is ample evidence to show many innocent people have been caught in its crosshairs.

James Mulvenon is the Director of Intelligence Integration at SOS International and a Chinese linguist. Dr. Mulvenon will discuss the legitimate threats that Chinese academics pose and point out some of the reasons that the initiative is essential to U.S. security.

This event will be moderated by Bob Guterma, the COO of SupChina and the Executive Producer of the China Initiative video.