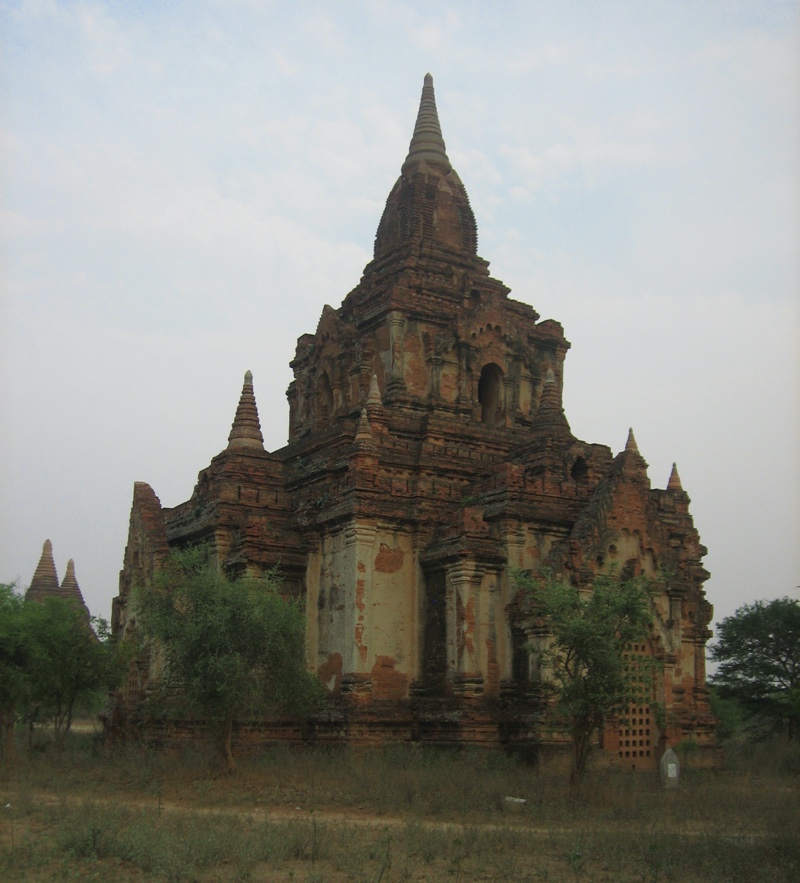 2020: Volume 19, Number 3
1. Editor’s Note
2. Scholars or Spies? U.S.-China Tension in Academic Collaboration
3. A Relationship on a Pipeline: China and Myanmar
4. Business Angels’ Investment Strategies and Organizational Change in China
5. Hongqi: from Mao to Xi
6. Some Unanswered Questions About the Shanghai Jewish Experience

Although the relationship between China and Myanmar goes far back in history, the energy relationship between two countries is quite new. Myanmar became the first non-Communist country to recognize the People’s Republic shortly after its founding in 1949, but ties remained rocky until the early 1990s. Western embargoes imposed on Myanmar after its crackdown on democracy in 1988 and on China after the Tiananmen Square massacre in 1989 pushed the two nations closer together. But Myanmar’s role in China’s energy security has been driver of improved ties.

Myanmar, a neighboring energy-rich nation, provides an overland route for energy supplies that offers China economic and strategic advantages. China currently receives 95 percent of its energy imports by sea, with approximately 80 percent passing through the Malacca Strait. Most of those supplies comes from the Middle East. Myanmar’s location on the Indian Ocean presents a money-saving alternative route and strategic geopolitical advantage by avoiding the Malacca Strait, a major international shipping lane dominated by the U.S. Navy. Energy resources can be shipped through the Andaman Sea and Bay of Bengal and transported to China from Myanmar through pipelines, cutting off 3,000 kilometers, reducing transport time by five to six days, and avoiding a potential confrontation with the U.S.1

Myanmar also is a potential energy source for China, thereby reducing dependence on energy from the Middle East. Two of China’s top three countries for energy supplies are Saudi Arabia and Iraq. Myanmar boasts the most diverse energy resources among ASEAN members, with  a total of 104 oil and natural gas blocks, 51 of them on land with the rest in the sea.2 According to 2017 data, Myanmar controls 0.3 percent (139 million barrels) of known world oil reserves, in the Salin Basin and in the seaside Yetagun Field.3 In addition, according to 2019 data, Myanmar has 0.6 percent (1.2 trillion cubic meters) of the proven natural gas reserves in the world. These reserves are located primarily in the Yadana, Yetagun and Zawtika areas in Moattama on the west coast of the country and the Shwe area in Rakhine.

In addition, Myanmar has the potential to help China decrease its dependence on liquefied natural gas imported from the Middle East. According to 2019 data, China is second in the world in LNG imports. LNG is more costly than natural gas. Shipping also presents potential dangers from bad weather, pirates, and accidents. Currently, China imports natural gas through a pipeline connecting Turkmenistan, Uzbekistan, Kazakhstan, and Russia.4

Myanmar plays an important role in China’s Belt and Road Initiative, the sweeping plan for infrastructure investment to link China to markets in Asia, Europe, and Africa. Energy supplies already are flowing from Myanmar to China through the Myanmar-China Natural Gas Pipeline and the Myanmar-China Oil Pipeline. 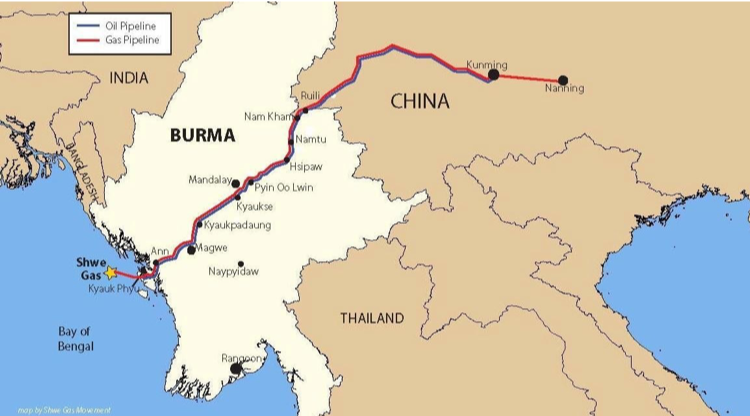 As seen in Map 1, the natural gas pipeline starts in Kyaukpyu city in Myanmar’s Rakhine State and ends in China’s Yunnan region. China and Myanmar agreed on the project in 2009,  and the pipeline went online in 2013.6 CNPC, China’s largest energy company, built the 793-kilometer long pipeline at a cost of $2 billion.7 By 2018, 3.2 billion cubic meters of natural gas had been transported from Myanmar to China, far short of the pipeline’s 12 billion cubic meter capacity.8

The pipeline contributes to China’s energy security by increasing energy supplies and diversifying delivery routes. It also reduces dependence on LNG. In 2018, natural gas piped in from Myanmar constituted only 2.6 percent of China’s 121.3 billion cubic meters of natural gas imports.9 However, operating the pipeline at full capacity would increase the percentage to 9.8 percent. The pipeline also reduces China’s dependence on sea routes through the Malacca Strait.

The Myanmar-China oil pipeline also has strategic value. As shown in Map 1, the oil pipeline between the two countries connects to the deepwater port of Sittwe and Kunming. In 2017,  3.87 million tons of oil was sent from Myanmar to China through the pipeline,11 which has an annual capacity of 22 million tons.12 China and Myanmar agreed on the 771-kilometer-long pipeline in 2007, and it was completed in 2015 at a cost of $2.5 billion.13 The pipeline provides the same benefits as the natural gas pipeline – supply and route diversification. Myanmar’s contribution to China’s oil imports currently is small – 0.76 percent in 2017. But bringing the pipeline to full capacity could increase oil imports from Myanmar to 4.3 percent of China’s total.

The pipeline provides China the opportunity to transport oil through the Andaman Sea and the Bay of Bengal to Myanmar. While China has not yet implemented this planned route, it is building the Kyaukpyu deepwater port in Rakhine State as part of its Belt and Road Initiative to accommodate oil tankers, which promises to reduce dependence on shipping oil through the Malacca Strait. 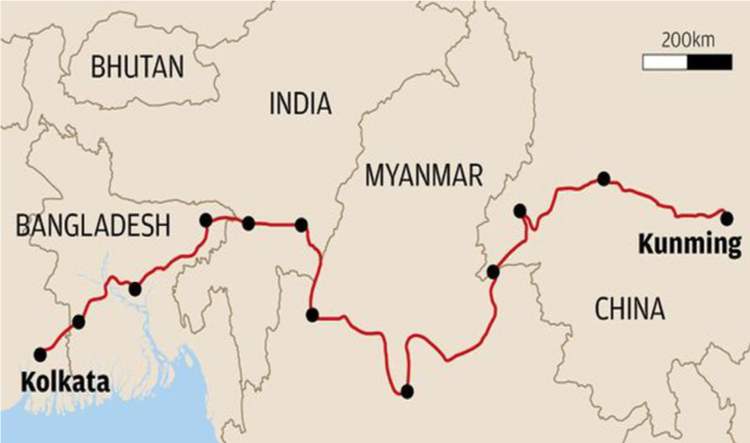 The location of Myanmar on the land route within the scope of BRI is shown on Map 2. In May 2017, Aung San Suu Kyi signed the “Cooperation within the Framework of the Silk Road Economic Corridor and the 21st Century Maritime Initiative” in Beijing. Suu Kyi and Chinese President Xi Jinping met in Beijing in December 2017 and agreed to extend the economic corridor to Kyaukpyu city in Myanmar.15 In November of 2018, Suu Kyi and China’s National Development and Reform Commission Vice President Ning Jizhe held further talks on the development of the corridor, a high-speed railway linking Kyaukpyu and Kunming, special economic zones, and more oil and gas pipelines.16 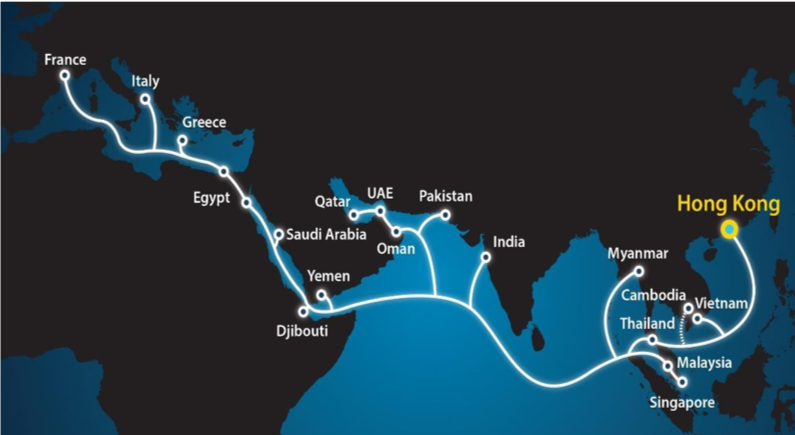 Map 3 shows the location of Myanmar on the sea route of the BRI.

No information has been made available on when the construction of the Kyaukpyu deepwater port and the special economic zone will be completed. According to the original plan, the port will have a container capacity that can compete with ports such as Valencia in Spain or Manila in the Philippines. Based on this information, the Kyaukpyu port would have a capacity of 5-7 million TEU,18 which would place it within the top 30 world ports in terms of capacity.

The Kyaukpyu port could significantly reduce China’s dependence on the Malacca Strait. China imported 546.1 million tons of oil in 2018,19 78 percent of which (426.1 million tons) went through the Malacca Strait.20 Assuming the Kyaukpyu port will have a capacity of 60 million tons, China could reduce its dependence on the strait by 14 percent. Kyaukpyu also offers a shorter route to China. Iranian oil transported to China through the Strait of Malacca covers about 9,900 kilometers. The Myanmar route would reduce that to 5,300 kilometers or 4,600 kilometers.21

Myanmar provides strategic and practical benefits for China’s energy security needs. It offers an opportunity to diversify supplies, reduce dependence on imported LNG, cut shipping times, and reduce dependence on supplies from the Middle East. The deepwater port being developed in Myanmar offers China the potential to avoid the Malacca Strait. Energy infrastructure linking Myanmar to China is relatively new, but plans for expansion are ambitious and the relationship between the two countries should be watched closely.

Neslihan Topcu is a freelance writer focusing on China's Energy Security Policies. Her undergraduate and Master’s degrees are from Adnan Menderes University. She studied at Kazimieras Simonavičius University in Lithuania and at the University of Minho in Portugal as an international student. Her specialization is China, energy policies and the Belt and Road Initiative.
More articles by the Author »
China Currents Email Updates Sign Up
China Currents Archive
Copyright © China Research Center | Privacy Policy
Back To Top
Search