The School of History and Sociology at Georgia Tech and the China Research Center present
Dr. Mulvenon on “Myths and Realities of Chinese Espionage”

Dr. Mulvenon’s presentation will first outline the scope and threat posed by Chinese intelligence operations in the United States, as described by senior US counter-intelligence and policy officials. Because much of the literature on Chinese intelligence is either outdated or fatally weakened by mythology and misinformation, the talk will then critically examine some of the prevailing views of Chinese intelligence tradecraft and offer an updated and more nuanced assessment of Beijing’s “layered intelligence” approach. This new framework will then be applied specifically to the large and growing set of China technology espionage cases, identifying commonalities and differences among them.

James Mulvenon, Ph.D., is General Manager of SOS Intenational’s Special Programs Division, where he has recruited and trained a team of nearly fifty Chinese, Russian, Korean, Arabic, Farsi, Dari, Pashto, and Urdu linguist-analysts performing research and analysis for US Government and corporate customers. A Chinese linguist by training, he is a leading international expert on Chinese cyber, technology transfer, espionage, and military issues. He also provides expert consulting support and commercial intelligence to Fortune 500 companies for due diligence, mergers and acquisition, CFIUS reviews, cyber security, and personnel security involving difficult business environments like China. Dr. Mulvenon received his B.A. in China Studies from the University of Michigan, studied Communist Party History at Fudan University in Shanghai, and received his Ph.D. in political science from the University of California, Los Angeles. His dissertation, published by ME Sharpe in 2001 under the title Soldiers of Fortune, details the rise and fall of the Chinese military’s international business empire. In 2013 he co-authored Chinese Industrial Espionage, which is the first full account of the complete range of China’s efforts to illicitly acquire foreign technology. Dr. Mulvenon is regularly invited to address senior government and commercial audiences on Chinese technology and cyber topics, and his comments have appeared in the Wall Street Journal, New York Times, and other international media outlets. 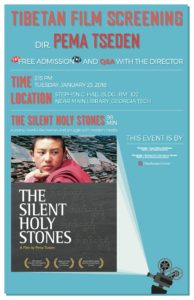 The Silent Holy Stones – A Film by Pema Tseden

A young monk’s fascination and struggle with modern media.

Free admission and Q&A with the Director

Note that the Jan. 23rd Screening at Georgia Tech is free; Tickets are required for The Jan. 24th and 27th screenings at Agnes Scott and Midtown Art Center.

All three will host a Q&A with the directors! 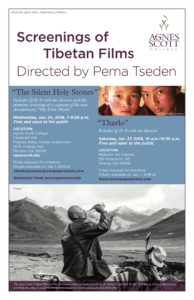 “The Silent Holy Stones”
Includes Q & A with the director and the premiere screening of a segment of his new documentary “My Little Monk”
Wednesday, Jan. 24, 2018, 7-9:30 p.m.
Free and open to the public

Note that the screening is free but tickets are required for the Jan. 24th and 27th screenings at Agnes Scott.

All screenings will host a Q&A with the directors!

Ticket required for entrance Tickets available on Jan. 1, 2018 at
tharlo.brownpapertickets.com

All screenings will host a Q&A with the directors! 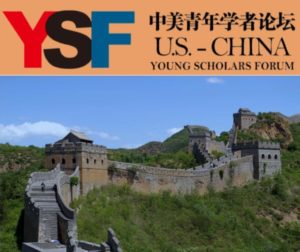 The U.S.-China Young Scholars Forum, initiated by The Carter Center and the Global Times Foundation since 2014, has focused on providing a platform for young scholars on the U.S.-China relations to share wisdom. The participants at this year’s forum will focus on the mix of nationalism and media that has fundamentally altered the dynamics and equilibrium of bilateral relations between the U.S. and China. The aim of these panel discussions is to promote quality interactions between young scholars and leaders of both nations to strengthen U.S.-China relations in the 21st century.

Robert Daly, director of the Kissinger Institute on China and the United States at the Woodrow Wilson Center and a former US Foreign Service officer

Synopsis: A Risen China is an unprecedented challenge to American power and principles. Any president would have a hard time responding effectively to Beijing’s ambitions. The difficulty is compounded by the current political crisis, in which the post-WWII consensus about the interests and values that drive American foreign policy has been lost. China is taking advantage of American confusion in predictable ways that threaten global liberal practices. Does it matter? Can Americans live as they wish if the U.S. is no longer the world’s most consequential nation?