Now in its fourteenth year, CHINA Town Hall (CTH) has provided Americans across the country a more nuanced understanding of the implications of China’s rise for U.S.-China relations and for their own communities. This year’s local town hall is sponsored by the Carter Center, the China Research Center housed at the Ivan Allen College of Liberal Arts, Georgia Tech, and Emory International Relations Association, a student organization at Emory.

Registration is required in order to receive the Zoom link before the event.  Click here.

Some 50 years after its conclusion, many aspects of China’s Cultural Revolution remain obscure, despite the fact that it ranked among the largest political upheavals of the 20th century. Perhaps the most puzzling is the two years of armed warfare between rebel factions that spread across China after a wave of rebel power seizures overthrew local governments in early 1967. Official sources indicate that some 250,000 people died in battles between civilian factions during this period, and another 1.3 million died in political campaigns and military operations to suppress the fighting and restore order. This talk provides an evidence-based overview of these conflicts, based on information extracted from 2,246 local histories published in China since the late 1980s. It addresses two puzzling features of this poorly understood period of recent Chinese history: why did antagonistic factions form, and why did violence break out and prove so difficult to suppress?

The China  Research Center, in cooperation with International Initiatives at  GSU and the Tennessee China Network, present our annual event:  Updates on the business environment with insights from experts.

A panel discussion with experts from transportation and supply chain, education, economic development and manufacturing backgrounds. 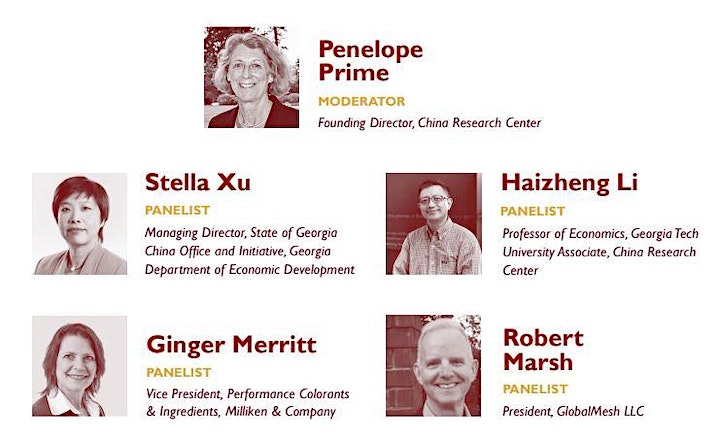 SYNOPSIS: 48 years after President Nixon’s trip to China and 42 years after President Carter and Vice Premier Deng Xiaoping made the decision to establish diplomatic relations, the bilateral relationship between the U.S. and China has hit the rock bottom. The growing hostility between two first and second largest economies in the world is threatening to derail the global pursuit for peace and security. Will there be a reset of the relationship in 2021? Can a new paradigm of managing the bilateral relationship be found? What should Washington do and what could Beijing do to stabilize the relationship and find ways to compete to make each nation great and cooperate to respond to global challenges?

SUSAN A. THORNTON is a Senior Fellow and Research Scholar at the Yale University Law School Paul Tsai China Center, Director of the Forum on Asia-Pacific Security at the National Committee on American Foreign Policy, and a Non-Resident Fellow at the Brookings Institution. Until July 2018, Thornton was Acting Assistant Secretary for East Asian and Pacific Affairs at the Department of State and led East Asia policy making amid crises with North Korea, escalating trade tensions with China, and a fast-changing international environment. In previous State Department roles, she worked on U.S. policy toward China, Korea and the former Soviet Union and served in leadership positions at U.S. embassies in Central Asia, Russia, the Caucasus and China.

This event is organized and sponsored by the China Research Center.

Join us for this discussion on how India-China tensions are affecting the business environment and global transitions.

China and India are the two most populous countries in the world respectively having about 1.44 billion and 1.38 billion population in 2020. Both the countries together account for about 36% of total world’s population and 67% of Asia’s population. (http://statisticstimes.com/demographics/china-vs-india-population)

Both the countries are nuclear powers and according to the Stockholm International Peace Research Institute (SIPRI), in 2019, China & India had the second- and third-highest military spends in the world. For last five months there has been a border standoff between these major two economies, and we will discuss various scenarios and their business implications on Asia and rest of the World with the help of well-known speakers / moderator. 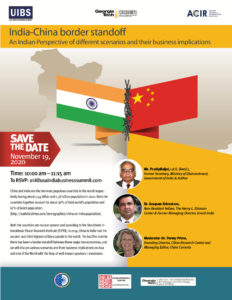 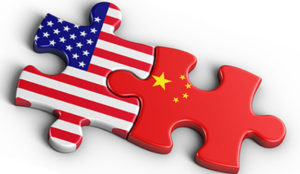 The Sam Nunn School of International Affairs is hosting a virtual talk on January 15, 2021 from 10:00-11:15 am. Dr. Deborah Seligsohn from Villanova University will be speaking on “Revitalizing the US-China Relationship in a New Administration.” Dr. Kaye Husbands Fealing will follow with remarks on science diplomacy in the US-China relationship. 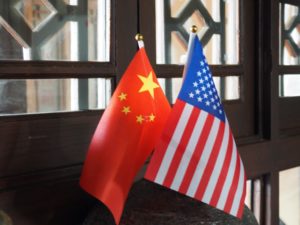 The webinar is held jointly by The Carter Center, the US Heartland China Association, and the China Research Center. It will focus on the experiences of both American and Chinese studying abroad in light of recent developments in U.S.-China relations since 2016. It will provide our audience insight into how U.S.-China relations affects the individual experiences of students as they pursue their education abroad. 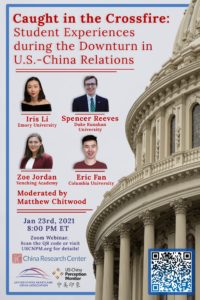 2021 marks the 42nd anniversary of the establishment of the diplomatic relationship between China and the United States. There have been ups and downs in the bilateral relationship, but the comprehensive engagement between Washington and Beijing in the past four decades has served as an anchor for global peace and prosperity. However, more recently, in response to the rise of China and its perceived aggressive expansion in trade, technology, and global influence, what began as a “pivot” to Asia by the U.S. has increasingly become an effort to contain and decouple from China.  Engagement policy was declared dead by top American officials. The bilateral relationship is under significant stress.  Against this backdrop, the Chinese People’s Association for Peace and Disarmament (CPAPD) and The Carter Center have decided to organize an online dialogue for prominent Chinese and American experts to reflect on the significance of the past bilateral engagement and how to influence the future realignment of the relationship.

Panel Discussion (Each speaker will speak for 7 minutes)

This meeting is supported by the following organizations: