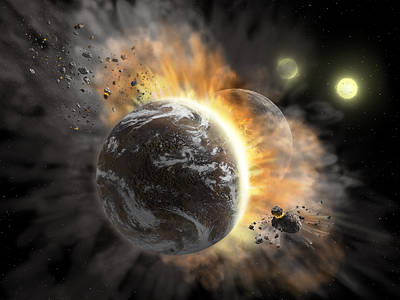 Over the past decade, governments around the world have begun adopting policies that make data they collect openly available to all users at no cost — notably information from Earth observation satellites.1 Satellites collect environmental data on a global scale, and the data are directly relevant to understanding and addressing a wide range of global and local challenges.

China, which launched its first Earth observation satellite in 1988, has long been involved in global discussions regarding open access to satellite data and has made a large portion of its data available in line with global norms. Recently, China has announced a number of policies to further increase the availability of its Earth observing satellite data, in line with its Digital Belt and Road (DBAR) initiative. China also seeks to lead in the transition to big data and cloud computing infrastructures that facilitate sharing. This article provides an overview of Chinese Earth observation activities, data sharing policies, and open data initiatives, and discusses potential future developments in this area.

From the beginning of its program, China made its data freely available to other nations in keeping with international norms and coordinated its activities with the World Meteorological Organization. Today, in addition to direct broadcast links, current and archived data can be freely accessed online. China also offers special capabilities to Belt and Road partner countries, allowing them to request dedicated observation services in the case of disasters, such as typhoons, sandstorms, or forest fires.3

China’s resource satellites, developed by the Chinese Academy of Space Technology, are operated by the Ministry of Natural Resources (originally the National Administration of Surveying, Mapping and Geoinformation).4 The first of these satellites was the China Brazil Earth Resource Satellite 1 (CBERS-1) in 1999. Additional satellites in the series were launched in 2003, 2007, and 2014. CBERS was a joint project between China and Brazil, developed in response to the increasing costs of satellite remote sensing data in the international market.5 Although the initial plan was to sell CBERS data on the international market, Brazil and China later chose to provide free access to the data. Data were made available free of charge to Brazilian users in 2004. In 2007, free access was expanded to include African users, and in 2010, the data were made freely available to anyone in the world under an open data policy.6

In 2011, China launched the first civilian Ziyuan resource satellite, followed by another in 2012, and a third in 2016. The data from these satellites are primarily used for domestic surveying and mapping. After ZY-3 was launched in 2016, the Satellite Surveying and Mapping Application Center of China’s National Administration of Surveying Mapping and Geo-information (later replaced by the Ministry of Natural Resources) made data available on a cloud service platform. Data could be accessed for free by non-profit organizations and domestic educational institutions. Fees were charged for commercial and private access. China also pursued bilateral and multilateral data sharing agreements.7 As of 2018, China had signed agreements to allow data sharing with 20 countries and was looking to expand these partnerships.8

The Ministry of Natural Resources houses the National Satellite Oceanic Application Service, which is responsible for the HaiYang ocean satellite series. The first HY satellite was launched in 2002, followed by additional launches in 2007 and 2011. These satellites were designed to help manage China’s marine resources and protect China’s marine rights and interests.9 Data from the HY satellites are available to international users through a tiered system. Researchers or non-commercial organizations that require archived data can fill out a request form online. Organizations that wish to receive large volumes of data in near-real time must pursue a memorandum of understanding or contract the Service. Data on China’s exclusive economic zone and sensitive regions are not included in the releases, and data that are provided may not be used for military or commercial purposes.10

China launched two Haunjing environment and disaster reduction satellites in 2008. These imaging satellites were joined by a synthetic aperture radar satellite in 2012, providing the ability to make observations regardless of lighting and weather conditions.11 The Ministry for Ecology and Environment is the primary user of the satellites and is responsible for development of satellite data applications.12

In 2011, China announced plans to develop the civilian China High-resolution Earth Observation System (CHEOS). Together with existing satellite systems, CHEOS aimed to provide China with all-weather, 24-hour global Earth observation capabilities.13 The first Gaofen (GF) satellite was launched in 2013, and 13 additional satellites had been launched by November 2019.14 For a number of years, China shared data from the GF satellites on an ad hoc basis with selected partners or to support natural disaster recovery efforts. In November 2019, China announced that it would make 16-meter resolution imagery from GF-1 and GF-6 satellites openly available to users around the world. Ms. Wenbo Zhao, Deputy Director of Earth Observation System and Data Centre, China National Space Administration, stated that China had “just started the journey of open data,” suggesting more steps in this direction may come in the future.15

Although China’s Earth observation satellite programs focus on different application areas and are operated by a variety of agencies, there has been an effort to also consider their potential benefits as a whole, both for domestic applications and for strategic value. In 1999, China initiated the first International Symposium on Digital Earth, bringing together 500 delegates from China and abroad. The resulting Beijing Declaration on Digital Earth identified the importance of integrated Earth observations for addressing major global challenges, such as environmental degradation and natural resource depletion.16

In 2007, China formed the Center for Earth Observation and Digital Earth within the Chinese Academy of Sciences. The organization focused on exploration of cutting-edge Earth observation technologies and applications.17 In 2011, the Center announced the Earth Observation Data Sharing Project, which would make data from international Earth observation satellites, such as the U.S. Landsat system, openly available to domestic Chinese users. Leaders identified data sharing as a necessary and important component of promoting innovation in environmental sciences.18

Three years after Xi Jinping announced the Belt and Road Initiative to provide $1 trillion of investment in more than 60 countries, the Chinese Academy of Science initiated the Digital Belt and Road Program. The aim of the program is to improve environmental monitoring, promote data sharing, and support policymaking using big data on Earth observations. The program involves more than making Chinese data available to others; it also aims to address the digital divide, raise awareness of the potential benefits of Earth observations, and increase international collaboration.19

In response to the rapidly growing volume of Earth observation data, the Chinese Academy of Sciences launched its Big Earth Data Science Engineering (CASEarth) program in 2018. CASEarth aims to establish an international center for big data and Earth science. It includes the development of an advanced cloud service platform to enable data access and analysis. It is expected to incorporate the Digital Earth Science Platform to provide information and visualizations to aid decision-making. It will also provide capabilities to promote sustainable development in support of the Belt and Road Initiative. CASEarth is expected to “break through the bottleneck of open data and data sharing” and produce a platform “with global influence.”20

In September 2019, the International Science Council Committee on Data, with support from Chinese Academy of Sciences, organized the International Workshop on Open Research Data Policy and Practice in Beijing. At the conclusion of the workshop, attendees released the Beijing Declaration on Research Data, which called for global cooperation in making public research data as open as possible on a global basis.23

Over the last 30 years, China has developed a large and advanced Earth observation satellite program capable of collecting high-quality data for a wide variety of applications. While many of these programs have involved international collaboration and data sharing from early in their development, in recent years there has been a concerted effort to leverage China’s advanced capabilities on the global stage.

This is seen in the large-scale efforts to open access to Earth observation data and to develop platforms open to a wide range of users. China is using its Earth observation data to contribute to major international efforts, increasing its stature and role in these efforts, and setting precedents with regard to how data may be used. Data sharing is directly contributing to its Belt and Road Initiative, strengthening ties with other nations in the region.

Open data efforts in other nations have demonstrated that open access to scientific data has significant benefits, enhancing scientific research and development of new applications. As China continues to increase the amount of data made openly available on the global level, its significant investments in data collection systems – including expensive Earth observation satellite systems – should generate social benefits on a global scale.