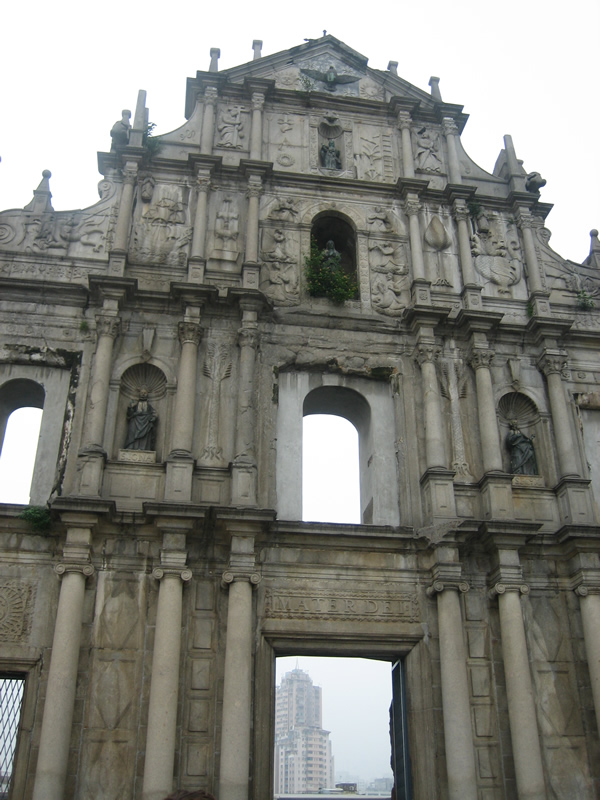 Macau, first established in 1557 and the oldest former European colony in East Asia, is again facing challenges to its recently established status as the world’s largest gambling center.

Enormous revenues derived from gaming activity – a key driver of Macau’s prosperity – have suddenly diminished. In 2014, monthly casino revenue peaked at almost $5 billion per month, and a year later the figure had fallen by almost half to a level last seen in 2010, according to the New York Times.

A number of forces have coalesced to prompt this decline. Perhaps most challenging for Macau has been President Xi Jinping’s vigorous campaign to eliminate corruption by officials, including those who gamble and move money through Macau and its casinos.  Thousands of officials have been charged with corruption, and the fear of punishment in China has spread. Authorities have focused on “VIP rooms,” where many of China’s elites had been doing their gambling. Large junket operators – who loan incentive funds to gamblers from China – also have been hurt because of a growing failure of gamers to repay large debts.  In addition, the courts in China will not enforce rules on repaying gambling debts.

At the same time, China’s economy has been slowing for several years, undercutting the wealth and affluence that had been fueling gambling and reckless spending among officials and elites.

Local government and political forces in Macau also have tightened regulations on the hotel/casinos and limited the number of gambling tables. Unlike in Las Vegas where much of the revenue is generated from lower-return slot machines, the big money in Macau has come from gaming tables and VIP rooms where high rollers wage huge sums on games such as baccarat.  Casino executives including Steve Wynn have been highly critical of these restrictions.

Another indication of the seriousness of the crackdown is a proposal to ban smoking in casinos and hotels. Smoking is common in China, and it is prevalent among casino goers.

The declines have taken place just as new gaming facilities have come on line. In May 2015, the first of several new billion-dollar-plus hotel/casinos opened, the Galaxy Macau, Phase II. In October, another great hotel complex opened, the $3.2 billion Studio City with its Gotham City design features.

More are promised. Six casino operators are slated to invest more than $20 billion in new resorts in the Cotai zone, the landfill area that is the Macau equivalent of the Las Vegas strip. This zone was created between the two islands, Coloane and Taipa, just south of the Macau peninsula and linked by bridges and causeways.

The current challenges evoke the territory’s long history as colonial entrepôt and former role as a gateway for the early China trade. Once the British developed Hong Kong after the Opium War and Treaty of Nanjing (1842), Macau went into a steady decline as Hong Kong captured the China trade and became the main entry portal to south China and the Pearl River Delta. Such were the vagaries of Portuguese colonial administration that for more than a century after the arrival of the British in Hong Kong, Macau struggled to find new sources of revenue to maintain its viability. Sadly, for most of its history prior to the last few decades, it was a sleepy backwater, neglected by its Portuguese colonial administration and visited by a modest tourist trade for gambling or other salacious activities.

In the early 1960s a new authority was installed over the poorly organized gambling houses, as a monopoly license was awarded to a new syndicate, Sociedade de Turismo e Diversoes de Macau (Macau Tourist and Amusement Company, or STDM). This finally brought in new investment capital to create casinos and hotels such as the original Grande Lisboa. The STDM also brought much-needed revenue to the government to create new infrastructure to support more and better facilities and arrival terminals for tourists coming by high-speed hydrofoils from Hong Kong. One of the very special opportunities for Macau was that it is the only place in China that allowed casino gambling, adjacent to a country with more than a billion people, many of whom enjoyed gambling.

The creation of VIP rooms for high-stakes players encouraged the tourist and gambling trades. These private rooms were designed for anonymity. Once economic reforms began to take hold in China in the 1980s and 1990s, the VIP rooms, supported and funded by junket operators, began to attract high rollers from China who were provided funds that could later be repaid in China with Chinese yuan. In this way, gamblers could avoid currency controls that limited the amount of cash Chinese visitors were allowed on each exit from China.

Major changes for Macau followed the return to Chinese sovereignty in December 1999. Macau became a Special Administrative Territory (SAR), and more new licenses were granted. Two were awarded to Las Vegas casino operators, Sheldon Adelson (Sands and Venetian) and Steve Wynn, and another went to Galaxy. The reason was because criminals were operating more openly in the last years of Portuguese control in the run-up leading to the handover, and the Chinese government desired to modernize and upgrade the quality and number of casinos and hotels with some other goals in mind for Macau.

Communist Takeover and New Directions for Macau as SAR

Granting new licenses for casinos and hotels signaled that the new SAR government (and implicitly the Chinese government in Beijing) had new plans for Macau. The broad and bold goal was for Macau to become the key recreation and tourist center for the Pearl River Delta city-region and south China.

China first introduced four special economic zones in the 1980s, three of which were in the Pearl River Delta city-region.  These were linked to Hong Kong and were to be used as tips of an economic spear to drive China’s economic growth with new innovations and trade links to the global marketplace as well as sources of capital from Hong Kong, Taiwan, and Southeast Asia.  This became especially prominent in the mid-1990s following the storied southern tour by China’s aging paramount leader, Deng Xiaoping.

The Pearl River Delta was then a densely populated region of roughly 40 million people with a network of cities and towns increasingly linked through new transport arteries. Factories producing consumer goods for the world marketplace attracted huge inflows of transient laborers to the area from the interior of China.

A 2009 Guangdong provincial document laid out a plan for the development of the greater Pearl River Delta region, and Macau was given a key role with high expectations as the leading recreation and tourist center.  While gambling was not identified as the centerpiece for Macau, any knowledgeable person would understand the subtext: the desire to develop Macau as a hub for gaming as well as for other tourist activities.

All of the recent prosperity and funds for Macau’s infrastructure were drawn from gambling revenues. The Macau government levied a 35 percent tax on gross gambling revenues and levied other special fees on casinos. The remarkable growth of the casino and hotel industry provided employment for many Macau citizens and attracted additional workers from the adjacent mainland.

Despite the best ambitions and aspirations for Macau to become a tourist destination with a multiplicity of activities, its key attraction has been gambling, and this has been the basis for the territory’s financial success and growth.

The numbers tell the story. The first of the new Las Vegas-style casinos opened in 2004; by 2009 there were 32 casinos overall, while there had been only 11 in 2002. The Macau government reports that gross gaming revenues grew during the period 2003 to 2008 from $3.6 billion to $13.7 billion, while the number of visitors almost doubled in the same period. More than half of these came from mainland China.

Pannell and Loughlin found in a 2015 paper that increasing numbers of the recent visitors were from China and many were one-day visitors who came specifically for gambling. This contrasts with the typical visitor to Las Vegas, who stays two or three nights and who may seek a variety of entertainment activities other than gambling. Consequently, the goal of transforming Macau into a tourist center for families does not appear to be working.

Hotel complexes in Macau are seeking to offset gambling revenue declines by becoming recreation centers for affluent tourists from China with Disney World-like attractions such as a Ferris wheel, a fake Eiffel Tower and gondolas on an ersatz Venetian Grand Canal. With these huge investments, and the reality of a diminution in gaming, can these hotels and their corporations survive?

The latest reports from Macau suggest that the government is beginning to feel pressure from hotel and casino operators to loosen up and allow more gaming tables. Such a relaxation also would ease a threat to jobs so critical to the social welfare and economic health of Macau. Of the territory’s 600,000 residents, 100,000 work in the casinos and hotels.

Macau, as it has done many times over the centuries, is again facing new threats to its well-being after a brief period in which it enjoyed unparalleled prosperity and wealth. The Macau SAR must walk a tightrope between local administrators and investors and the political forces in mainland China.

China wants Macau to be an attractive and wholesome recreation center for the Pearl River Delta region and south China: gambling would be allowed, but it would be done in a restrained and controlled manner. China’s citizens would enjoy the pleasures of a big entertainment center without the corrupting influence of excessive gambling as seen in the capitalist West.

Casino operators, meanwhile, seek the enormous returns that are so tantalizing in the gaming industry.  Yet they must face the vicissitudes of policy-making and competing political factions in a Leninist state. Will the anti-corruption campaign fizzle out after a couple of years, allowing high rollers to return to Macau and its VIP rooms? Or will a more modest and restrained atmosphere evolve that reduces the opulence and wealth, while recent investors lick their wounds and accept lower rewards? The bets are on the table, and the roulette wheel is spinning.

Dr. Clifton W. Pannell is emeritus professor of geography at the Franklin College of Arts and Sciences at the University of Georgia and an associate of the China Research Center. His research and publications have focused on the economic and urban geography of China and East Asia. He has taught at the University of Hong Kong during which he did field work in Macau and Hong Kong.
More articles by the Author »
China Currents Email Updates Sign Up
Recent Articles
China Currents Archive
Copyright © China Research Center | Privacy Policy
Back To Top
×Close search
Search
×