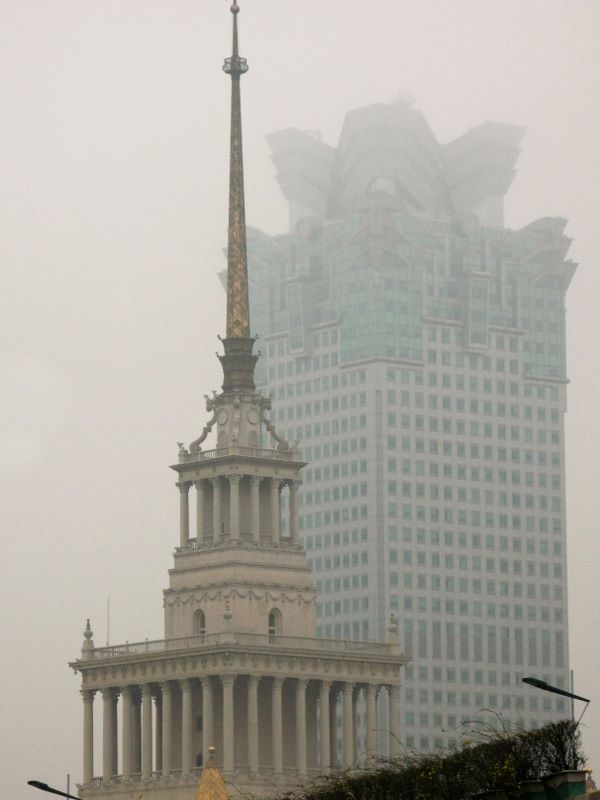 In 2008 and 2009 if I asked a Beijing taxi driver or anyone on the street about air quality on a hazy day, I was normally told that it was fog. No matter how much I tried to convince them that it was air pollution, most would just laugh and tell me that I did not know anything. Now, there is not even a need to ask what it is. In fact, when President Xi Jinping walked in Nanluoguxiang district on February 25, 2014, Xinhua’s headline read: “Xi Jinping Visits Beijing’s Nanluoguxiang amid the Smog: Breathing Together, Sharing the Fate (Huang, 2014).” Some people even commented about it on social media, asking why he was not wearing a face mask, which has become popular recently. Extremely bad air pollution events, especially linked to fine particles known as PM2.5, have contributed to changing Chinese perceptions of their air quality and to raising awareness.

Environmental problems and air pollution incidents in China are not at all new. Ever since China started with a rapid economic growth model, there was an underlying policy of industrializing first and cleaning up later. What is new is the magnitude of the problem, and the urgency within the government to solve it. Prime Minister Li Keqiang in March 2014 “declared war on pollution,” acknowledging that pollution is the major problem in the country (Li, 2014). Li wrote in a report he delivered at China’s annual parliamentary meetings that heavy pollution “is nature’s red-light warning against the model of inefficient and blind development,” and added: “We must strengthen protection of the ecological environment and resolve to take forceful measures (Li, 2014).”

This is also illustrated in the Decision of the Third Plenum of the Eighteenth Party Congress that the government will “improve local government’s performance in” and “allocate more law-enforcement resources to the primary level in such key areas as … environmental protection (Decision of Third Plenum, 2013).” Most importantly for air quality, the plenum also explicitly states that it will “establish and improve an environmental protection system that strictly supervises the emission of all pollutants, and independently conduct environmental supervision and administrative law enforcement.” As they promised to publicize environmental information, they also opened a new website where they post the real-time air quality index in various Chinese cities (http://113.108.142.147:20035/emcpublish/).

How bad has China’s air quality been, you might ask. The Ministry of Environmental Protection announced that only three of China’s seventy-four cities met the national standard for “fine air quality” in 2013 (Wong, 2014). The three cities were all in remote areas: Lhasa – the capital of Tibet; Haikou – the capital of Hainan; and Zhoushan in Zhejiang province. These were the only cities that had an average air quality index (AQI) value of less than 100. Although AQI is based on six different pollutants (sulfur dioxide SO2, nitrogen oxides NOx, coarse particulate matter PM10, fine particulate matter PM2.5, carbon monoxide CO, and tropospheric ozone O3) and is determined by taking the worst value among them, it is safe to assume in China that PM2.5 usually determines the general AQI. The Chinese AQI value of 100 translates into annual average PM2.5 concentrations of less than 75 micrograms per cubic meter (μg/m3). Taking into consideration that the World Health Organization (WHO) guideline for the annual average is 10μg/m3, and the U.S. and EU standards are 12 and 10μg/m3, respectively, AQI of less than 100 is not necessarily considered “fine air quality” in other parts of the developed world. Even then, the northern region including Beijing, Tianjin, and Hebei had only 135 days in year 2013 that met this criterion (Wong et al., 2014). The figure below taken from Andrews (2014) compares China’s standards to those of the U.S. and Europe. 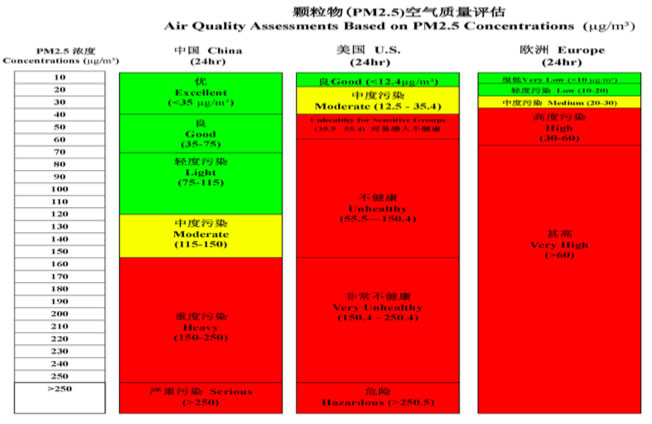 The WHO announced a report linking outdoor air pollution to 3.7 million annual premature deaths worldwide (WHO, 2014). Approximately 350,000-500,000 Chinese are estimated to die prematurely due to air pollution per year based on studies by the World Bank, WHO, and the Chinese Academy for Environmental Planning (Moore, 2014). This is no surprise, since PM2.5 concentrations can be even higher than 500μg/m3, which is even not listed on the figure above. In addition, 450,000 deaths were already estimated in 2000 due to China’s PM2.5 concentrations from its own emissions (Saikawa et al., 2009).

As air pollution began to be more visible and cause problems for longer periods of time, the Chinese government started to change course on air pollution regulation. On February 29, 2012, China’s State Council approved its first national environmental standard for PM2.5 at 35μg/m3 annual average (Zhang et al., 2012). Furthermore at the end of 2012, the government issued the 12th five-year plan on Air Pollution Prevention and Control in Key Regions, which for the first time provided a comprehensive plan for three key regions (Beijing-Tianjin-Hebei, Yangtze River Delta, and Pearl River Delta) and 10 city clusters, involving 19 provincial level jurisdictions and 117 cities. There were three reasons why this was important. First, this issued ambient concentration targets for the first time for SO2, PM10, NO2, and PM2.5. The reductions required for these pollutants were 10 percent, 10 percent, seven percent, and five percent below 2010 levels, respectively by 2015. For the three key regions, PM concentrations were required to be reduced by six percent rather than five percent. Second, it set higher emissions reduction targets than the national target. For example, SO2 reduction and NO2 emissions reduction targets are four and three percent higher than the national target. It also required non-attainment cities to develop air quality attainment plans, which needed to be publicly available.

After severe haze events in January 2013, the Premier Li Keqiang pledged to use an “iron fist” on the country’s pollution at his first news conference after the annual legislative session in March (Wu, 2013). Ten Measures on Air Pollution Control was then issued in June 2013 to indicate his seriousness about that promise. The measures he outlined were quite vague. However, one specific goal was included: to improve public transport and clean energy production, reducing the ratio of atmospheric pollutant emissions to GDP by 30 percent or more by 2017.

This was not the end of regulation in 2013. On September 12, the government further implemented the Action Plan on Air Pollution Prevention and Control, which included much stricter standards, higher goals, and more concrete measures. Its target for PM10 concentrations is now to reduce by at least 10 percent by 2017 compared to the 2012 level. A much larger emphasis was put on the three key regions (Beijing-Tianjin-Hebei, Yangtze River Delta, and the Pearl River Delta) and PM2.5 concentrations are to be reduced by 25 percent, 20 percent, and 15 percent in each of the regions respectively, within the same period. For the first time, there was a specific target for annual PM2.5 concentrations to be kept at 60μg/m3. Here again, there was a mention of reducing emissions in the transport sector such as eliminating old, high-emitting “yellow label” vehicles, promoting public transportation and alternative energy vehicles, and upgrading fuel quality.

Following the Third Plenum’s increased interest in pollution control, Beijing on January 16, 2014, passed the “Regulation on Prevention and Control of Air Pollution in Beijing” on January 21, 2014. This featured not only stringent emission controls but also higher penalties in order to mediate haze events. For the first time in history, the Beijing Municipal People’s Congress voted in favor of the regulation and replaced a guideline that was issued in 2000 (Zhu, 2014). Beijing is now required to limit and gradually reduce the major air pollutant emissions using annual quotas for district, county government, and for individuals. Quotas are also in place for coal burning, and a plan is in place for regulating vehicle emissions (Zhu, 2014). It is the first time Beijing has set a cap on total pollutant emissions rather than on growth rate, and these new regulations make clear the intention of the government to clean up its air.

From the recent regulations, it is clear that the target sector is coal-fired power plants and road transport. Why is the regulation of tailpipe emissions so important? One main and obvious reason is the sheer number of cars, which has increased exponentially in China starting in the 1990s (Saikawa et al., 2011). China has been promoting its automobile industry as a “pillar industry” since 1986 (Thun, 2006). As a way to introduce cleaner, more advanced technologies from developed countries, it has been strategic in adopting stringent emission standards (Saikawa and Urpelainen, 2014). Since it adopted its first emission standards in 2000, China has successfully been tightening the regulation at a very rapid pace (Saikawa, 2013). The problem here and in some other developing countries is the fuel quality. It has always been the case in China that emission standards are adopted first, followed by fuel quality standards with some delay, although it is inefficient to run vehicles with low-quality fuel (Saikawa, 2013). In the past, this even caused some of the vehicles to break down, without customers knowing it was because of high sulfur content in their gasoline.

Because China’s emission standards have advanced far, it is not possible any more to meet stringent emission standards with lagging fuel quality. Low sulfur fuel is required for vehicles with clean technologies, and without high quality fuel, vehicles are destined to fail. In fact, Euro IV emission standards, planned to be in effect in late 2011, had to be delayed because of the lack of high-quality fuel then (Zhang et al., 2012). Oil companies are more often than not reluctant to make investments in clean fuel and they play a powerful role in emissions regulations in the road transport sector (Saikawa, 2013). Whether the new Xi-Li administration can exert its will against the powerful oil companies is the big question.

What is the main challenge for reducing emissions from power plants? Coal is cheap and China has been using coal to produce 69 percent of its energy (EIA, 2014). With a very rapidly increasing energy demand and being the largest global energy consumer since 2010, China has been investing in alternative energy including solar power and wind. China was the world leader in clean energy investment in 2013, with $54 billion invested in renewables and leading by a large amount from the second largest investor, the U.S., with an investment value of $36.7 billion (Magill, 2014). As China installs more electricity generation capacity from renewable energy, the hope is that coal dependence will be much lower.

China’s large investment in renewables is great news for the other countries as well. Although China’s main motive is its economic development, its shift to renewables could not only reduce air pollution and adverse health impacts within China, but also reduce the impact of global climate change. When China’s major energy source becomes renewables, then the current growth in plug-in hybrids in China will also produce much sought-after emissions reductions both from tailpipes and power plants.

What does it mean to have new political leadership for environmental protection in China? So far, it appears that the new leaders are more serious and concerned about mitigating air pollution. For China and other countries that have prioritized rapid economic growth over everything else, now is the time to reverse such trends. Increasing the weight of environmental damage in development progress evaluation, as stated in the Third Plenum’s Decision, needs to become a norm for moving forward. With good air pollution goals in place, a workable implementation strategy is now needed. The new environmentally friendly China with new leaders began by showing the world that it is capable of creating stringent standards for its environment. Now is the time to also illustrate that China is serious by implementing effective policies as well.

Decision of the Central Committee of the Communist Party of China on Some Major Issues Concerning Comprehensively Deepening the Reform, (January 16, 2014), http://www.china.org.cn/china/third_plenary_session/2014-01/16/content_31212602.htm

Li, Keqiang. “Report on the work of the government.” March 5, 2014. http://online.wsj.com/public/resources/documents/2014GovtWorkReport_Eng.pdf Retrieved online on July 28, 2014.

Dr. Eri Saikawa is an assistant professor in the Department of Environmental Sciences and the Rollins School of Public Health at Emory University, and is an associate of the China Research Center.
More articles by the Author »
China Currents Email Updates Sign Up
Recent Articles
China Currents Archive
Copyright © China Research Center | Privacy Policy
Back To Top
×
Search