China saves, the U.S. consumes-or so the headlines say. Many analysts (including this author) have written about China’s high savings rates and therefore low consumption, which reinforces China’s dependence on exports for its growth.

The problems with this dependence are first that China has been so successful with exports that most major buyers cannot absorb more of them and will not be a source of future growth. Secondly, that such high exports make China’s economy vulnerable to the business cycles of other parts of the world. Even before the current financial crisis, which has caused exports to decline substantially, there was a vigorous debate within China about how to stimulate domestic demand to get around these problems.

To date, very little has changed in China in terms of policy or institutions to address the domestic demand issue in sustainable ways. To be fair, the global financial crisis has caught the attention of policy makers everywhere, putting short-term fixes out front. Stimulus packages are popular, and China has its own version, which in essence means funding infrastructure projects combined with low-cost loans via the banking system for other government construction projects. Subsidies for rural families to buy consumer goods and a tax cut on auto sales have also been made available, but there is little evidence yet that many have taken advantage of the offers. The stimulus may be working to keep growth afloat, but in terms of changing the domestic-external demand imbalance, something more will be needed.

So what might that be? Thinking through this question from the view of a typical family in China sheds some light on the nature of savings and consumption in this transition economy. Savings is defined as earned income minus consumption in a given year. Three aspects of how a family participates in China’s impressive growth and development could be thought of as: 1) access to a better life; 2) worries about losing that better life; and 3) defining what it means to have a “better life.” The focus here is an average family, not one that has ties to government or party that provides access to exceptional opportunities. Some people in this second category live very well indeed, but their choices about employment, spending and saving cannot explain the overall trends in China’s economy. 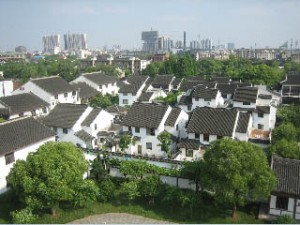 If a person has a wage-paying job, i.e., a formal job that earns a monthly paycheck, there is a base wage that has risen with growth in China’s economy but still is considered basic pay. For an employee working on the line in a factory near Beijing, for example, that base pay averages 1,200 RMB to 2,000 RMB per month ($177 to $294). In addition, most people receive an annual bonus at Chinese New Year that equals one month’s pay or more. Many people do extra jobs or work overtime for extra pay. In addition, both spouses in a married household are likely to work, increasing the options and income.

In the countryside, if a farming family is able to raise and sell a cash crop or has a small, side business such as trucking or running a store or restaurant, they can do better than subsistence. If a family member ventures out and finds a wage-paying job in the city, the family usually receives part of this income as well, especially once a year at Chinese New Year when the family member returns for a week or more.

Another way an average person can share in China’s growth is to speculate in the domestic stock market. Since dividends are not paid on shares, making money in the market means being lucky enough to buy low and sell high, and hence the stock market is not considered a long-term investment. Some people have made extra money-sometimes substantial amounts-in the market. One difference between families in China and families in the U.S. in this regard is that Chinese families usually think of their market investments as money that is not essential for living. The market is for making an extra gamble that may or may not pay off, if they have money to lose. Many families continue to hold savings in cash in bank accounts rather than using their basic savings to buy stocks.

Borrowing to spend is not common or easy. Base wages generally cover necessities, and any extra income earned via bonuses, second jobs, remittances or stock market winnings is most likely treated as a lucky addition, and, according to economic theory, a higher proportion of this income is probably saved as compared with the basic monthly income, at least for some time. Once savings have accumulated, they are often spent on big-ticket items such as a condo or a car, a child’s tuition, or one’s own or a family member’s expenses after retirement.

One way that a generation of people came into wealth in China is related to housing reform. Before reform, people working in urban areas were assigned apartments by their employers. These apartments were owned by the enterprises or institutions they worked for, and so if they paid rent, it was very low. The apartments were part of the benefit package supplied under the former socialist system. As a first step in housing reform, government enterprises and institutions sold residents their apartments at highly subsidized rates. For example, a one-bedroom apartment in Beijing now worth $100,000 might have cost just $10,000.

While some people have sold their condos, casual observations suggest that most have not. In fact, many families have saved money and then bought a bigger condo, keeping their older ones as an investment, to rent out, sell later or hold for their child when they will need a place to live to start a family. Surprisingly, many families earning basic wages of even 5,000 RMB ($735, or $1470 if both spouses work) per month own 2 to 5 condos, sometimes in multiple cities. The value of this real estate must be enormous, and represents “locked-in” savings not currently available for consumption.

People from small towns, inland areas or the countryside often create their own wealth by moving to urban areas to try their luck with a small business. Fast-food stands, flower stalls, a space at Beijing’s famous Hongqiao or “Pearl” market, are some examples. Local residents also open restaurants and other family companies. These companies need to bid for a license or permit to locate on a particular street or have a booth in one of the markets. They can often make a decent living in terms of generating income for their families this way.

The Uncertainties of a Better Life

However, the uncertainties built into these new income-generating opportunities are high. Change in China is very fast. Policy changes affect how one does business, and neighborhoods are frequently demolished for the next high-rise. Both can quickly end the fortunes of the small business owner. The lesson is to earn as much as you can as fast as you can, and save most of it so you can start again when needed. Every several years neighborhoods can change almost completely in terms of the restaurants and stores that are open, the vendors that are around selling snacks and fruit, and basic services such as dry cleaning and phone cards. Whole streets of businesses have disappeared within days when a new construction project was begun. With the lack of insurance policy options, saving for these rainy days must be a priority for most people.

Among other major, uncertainties that are officially recognized and supported by research is the need for families to save for unexpected health expenses, education and retirement. The previous versions of these social services and systems from the time of Mao’s leadership were eroded with reforms, and China’s policy makers are in the midst of recreating them for their modernizing society. In the meantime, however, saving for these future expenditures is one of the main drivers of a high savings rate from a household’s point of view.

Further, the more that people rely on the private sector rather than state enterprises for their employment, the more uncertainty is introduced into their lives. The insecurity associated with market business cycles is something that we understand in the U.S. even if American households underestimate the risk at times. In China, however, these cycles are a new aspect of life that is part of the transition to a more market-oriented economy.

In the midst of all the discussion of high savings and low consumption, the middle class in China seems to feel that it has much of what it needs. Families eat out at restaurants many nights in a week; they have plenty of clothes; they are saving for or have already purchased a car; they have a place (or several) to live; they have taken more vacation trips than their parents could have even dreamed of, both within China and abroad. And so what do they want to spend their money on? Not much, it seems-except for intangibles such as good health, excellent education for their children, and security in retirement.

Creating a dynamic, domestic market would require a competitive, innovative business environment where companies would seek out and create home-market niches based on new products, services and entertainment that would appeal to the Chinese consumer or business end-user or that would help reduce the uncertainties currently built into life today. This, in turn, may require more economic activity to be service and private-led, rather than manufacturing and state-led. Financial reform that allows for loans for small- and medium-sized companies, and for individuals and families, would help, as would new financial products such as basic insurance options for home, life and health.

In rural areas there are many families that cannot join the middle class with their current income options. The combination of land that is locked into state ownership, and so cannot be sold to finance new livelihoods, and the difficulties of moving one’s residence due to the household registration system, keeps these families from gaining anywhere near as much as those who are lucky to live in urban areas and are educated. Chinese statistics put the average annual income of the 727 million rural residents at 4,761 RMB or $700 per year (China Daily Business Weekly May 18-24, 2009, p.12).

Making Buyers Out of Savers?

Some of the factors that are suppressing consumption in China today may be temporary. The locked savings in housing, for example, should be whittled away as families take advantage of their investment for their children, retirement or other big ticket items. Consumption behavior is also known to lag increases in income, which has happened for many families in China for many years. As growth rates level out, consumption spending is likely to catch up. And everyone talks about the younger generation and their willingness to spend.

The big question is whether major policy and institutional change will be required to stimulate China’s domestic market, and whether these changes are feasible. Reforms might include building a competitive financial services sector, revaluing the Chinese currency (which would make exports relatively expensive and imports relatively cheaper), ending the household registration system, and adding a property tax while lowering the value added tax that keeps the prices of goods high. Or will the political base of the production sector dominate such that production-oriented policies will continue? Hopeful signs exist. Reforms targeting benefits to the average person, such as the new labor contract law, have been designed and implemented. Others, such as a national pension system and requiring listed companies to pay dividends to shareholders, are in the works.

On top of these moves, ironically, the current economic crisis, bad as it is for everyone, may give China a push to move aggressively to make the necessary changes to build a domestic-demand engine. If there was any doubt that continued export growth was questionable, the current global business environment has shown China the vulnerabilities of their past export-dependent growth.