On Friday, November 9, 2007 five China specialists sat down at Atlanta’s Carter Center to discuss China’s 17th Party Congress. The roundtable discussion focused on China’s future, specifically with regard to major decisions and statements from the October party congress in Beijing. Topics included changes in the Chinese Communist Party’s (CCP) leadership, trends in China’s political reform, the Party’s economic development strategies, and implications on Chinese foreign policy that follow from the congress. 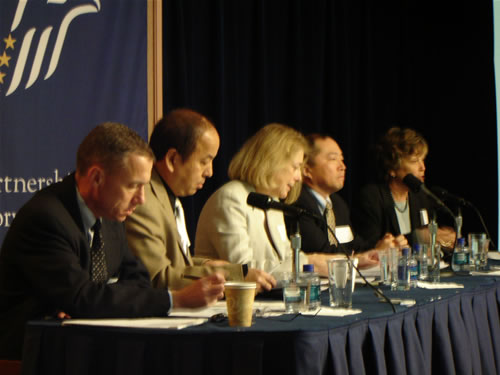 The future of political reform in China was addressed first in a brief presentation by Wang. He outlined three key needs facing China that must be addressed through political change. First, China is challenged by the need for more credible and effective governance for its vast populace and geography. Wang used the metaphor of a high pressure boiler with an increasingly heavy lid representing party controls over Chinese civil society. This dynamic is apparent in the Party’s uneasiness about China’s turn on the world stage for the 2008 Beijing Olympics. Second, economic development in China will require political reform if the nation is to realize its goals of world preeminence and higher living standards for its people. Changes to these ends would allow for rational governance and an open, competitive marketplace for ideas and innovation. Finally, political reform within China is needed in order to ensure international peace in the future. Beijing – with its current political characteristics – can look forward to challenges from the US and its allies, who will seek to block the rise of a country with such a vastly different ideology. The greatest obstacle to political reform in China is incentive-based. The “new rich” in China are largely not in favor of reforming the political system because they currently enjoy benefits of the regime’s monopoly of power. Much of the discussion at the roundtable talk focused on the need to de-criminalize the existence of factions within the CCP as a means of allowing a type of intra-party democracy to emerge. Such a move toward pluralism in the political system would represent a limited, but meaningful change in Chinese politics.

Local political autonomy in China was another central theme of The Carter Center’s roundtable. Liu’s presentation addressed some of the CCP’s shortcomings in dealing with local politics, including the basic need for more democratic institutions at the township level. And although Paramount Leader and CCP General Secretary Hu Jintao’s speech at the congress had several mentions of democracy, Liu contended that in the Party’s eyes, China “must say no” to most Western democratic values. Can a party, he asked, with no meaningful language on democracy be expected to enact a credible plan to install truly democratic institutions? Furthermore, can the Beijing Consensus continue to represent a viable alternative to Western notions of political and economic development?

The Chinese government’s unique management of the country’s political and economic systems was discussed in terms of changes in Party leadership and the challenge posed by corruption. While the “weaker” nature of the newest guard of party leaders bodes well for potential change, it is still believed that a crisis of some sort – in the form of a costly engagement over the Taiwan Strait, a major economic downturn, or intense social unrest – may be the only way by which institutions in China undergo significant reform. According to Wang, the rampant corruption in China does not represent such a crisis because rather than being of a pure rent-seeking type, most of the corruption involves deliverable goods and services and is subject to sanctioning when transactions fail. The corruption problem was linked by roundtable speaker Penelope Prime to more market-oriented challenges that China may face, however, such as crises in credibility and human capital.

Prime went on to give remarks on aspects of both Party progress in economic development efforts and declared Party goals for the next five years. In terms of the current system, the CCP has given great attention to the development of China’s capital market. In the wake of increased private ownership and property rights a Party discussion has ensued on structuring the capital in a more orderly and efficient manner. The Party has also given consideration over the past five years to reforming corporate governance. Another topic of debate has been the rebuilding of the social welfare sector of the economy. The CCP is now discussing careful, controlled means of addressing social security institutions that essentially fell apart during the reform period. Some major goals were identified as being central to the Party’s interests over the next five years. The first, that of working toward developing the rural economy, was discussed by Prime and other roundtable participants in terms of the political institutions that stand in the way of progress. Problems persist with social equity and the control of land in rural areas, and the government has shown more willingness to talk about the problem than to actually work to bring social equity to the countryside. Other goals included confronting China’s environmental and resource challenges, building domestic innovative capacity, and correcting the strong biases toward exports and against domestic consumption. Again, CCP discourse on these economic development topics tended to be indicative of the array of political challenges faced by the government in China.

General Secretary Hu’s speech at the congress included remarks on his stated goal of building stronger armed forces through science and technology. While the Chinese head of state’s notions generally follow the seminal writings of Mao Zedong, panelist Willner suggested that Hu is currently making a move to build his own legacy via his Scientific Development Concept. An important challenge to the CCP with regard to China’s armed forces is the need to balance military funding with other governmental actors and programs that demand resources. Moreover, the military must funnel resources internally to programs where they will have the greatest impact. This was reinforced by remarks by Hu about strengthening the PLA through targeting sectors for intensive development. The PLA is also under pressure to solve problems with equitable pay and personnel incentives, to plan for domestic contingencies stemming from social unrest, and to address competency issues linked to its forces’ lack of combat experience.

Willner identified an important trend that speaks to the Party’s attention to Taiwan in its personnel decisions. The Chief of the PLA General Staff joined a list of other senior officials – including the Deputy Chief of the General Staff and the Air Force and navy heads – who are all veterans of the Nanjing military region. The region is important to the government and the armed forces because of its proximity to the island of Taiwan. In light of the Party’s avoidance of references to the use of force at this congress, questions arise as to whether these personnel trends are indicative of actual PLA preparations or simply of a desire for leadership with sufficient Taiwan-related experience in case of a conflict. Recent Party moves also saw a number of top-tier professionals from China’s space sector moving into PLA weapons development. This is further indication of the armed forces’ emphasis on counter-space technologies and “no-contact” war planning, which stresses the engagement of a local military without third-party intervention.

The free roundtable event was sponsored by The China Research Center and The China Program of The Carter Center.