Two weeks of travel by hired vehicle in Xinjiang during June-July 2006 left a deep impression of rapid development underway in China’s westernmost region. Very large amounts of money are clearly being poured into Xinjiang to develop transportation, communication, education, and housing infrastructure, and to build Xinjiang’s energy infrastructure and production. Efforts to modernize Xinjiang’s agriculture are also apparent, even if they are not as breathtaking as in other sectors. In all, a coordinated effort is underway to lay a basis for accelerated development in Xinjiang.

The most dramatic developments are in transportation. Newly built or refurbished highways abound. The hard-surfaced, two-lane “Petroleum Highway” cutting across the eastern part of the torrid Takmalikan desert opened in the late 1990s. Green belts of tamarind bushes and white poplar trees run alongside its 400 kilometer length, to a width of about 30 yards on either side. The size of the saplings indicate they were only recently planted, while a placard at the north end of the highway indicates that China National Petroleum Corporation (CNPC) planted the trees in 2003-2005 at a cost of RMB 218 million. The trees would not last long in the Takmalikan without irrigation, and over 100 wells have been drilled at standard distances along the highway to supply water to the plants via Israeli-derived drip irrigation (in which perforated plastic tubes carry water to the roots of plants).

But services have not yet been built along the highway; signs warn travelers to fill up with gasoline before setting out. As the name “Petroleum Highway” indicates, the road is intended to serve as the backbone for exploitation of the Takmalikan’s rich petroleum resources.

A highway built in the late 1990s also extends east of Hetian (Khotan in the old usage) linking up with the southern end of the Petroleum Highway at Minfeng. Prior to that, there was, according to locals, no modern road east of Hetian. A very good, U.S.-interstate or German autobahn-style limited-access highway has just opened extending north from Kuerle (Korla in the old style) north- a city that hosts Mobil Oil Corporation offices in the effort to exploit Takmalikan oil-to Turpan and then further north to Urumuqi, Xinjiang’s capital. This provides good road access between the rail junctions at Urumuqi and Korla, at the northern end of the “Petroleum Highway.” 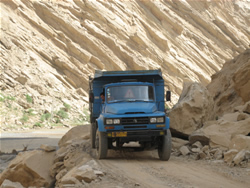 North of Kuche, a city lying about two hundred kilometers west of Kuerle on the “northern silk road” along the edge of the Takmalikan, surveyors are at work laying out alignments for widening and improving of currently narrow roads winding through the foothills of the Tianshan Mountains. Construction equipment is being marshaled along those routes, and one old compound has been designated headquarters for the construction effort and was festooned with new signs and propaganda banners proclaiming the importance of roads for Xinjiang’s development. The hard-surface highway extending north of Kuche to the ancient ruined city of Subashi ends at the entrance to that ancient ruin. Locals told me that plans are being made to push the hard surface road north through a rugged canyon to link up with the soon-to-be expanded highways north of Kuche.

A highway has been pushed over the Kyrgyz-China border at Irkestan Pass about 150 kilometers west of Kashgar. A detailed map of Xinjiang published in Beijing in 1999 did not show such a road (nor did earlier CIA-published maps I had consulted), yet the road was in heavy operation in mid-2006. Truck traffic was heavy. Scrap metal seemed to be the major commodity flowing from Kyrgyzstan to Kashgar, while Chinese manufactured goods flowed west. A large “port” has been constructed just below the great rise to the crest of the mountains on the Chinese side, where there was abundant traffic and commercial activity. Several years ago the Asian Development Bank decided to fund two trans-Kyrgyz highways-one crossing into Kyrgyzstan from China at Irkeshtan, and the other at Torugart Pass, 100 kilometers to the north.

Across Xinjiang, gas stations are opening like bamboo shoots after a spring rain. Whether because of growing market demand or government directive is unclear, but such stations are abundant. Most have that just-opened look, and many others are under construction. There is apparently sharp competition in this area between CNPC, Sinopec, and Xinjiang companies, including one affiliated with the PLA Construction and Production Corps in Xinjiang. It is not uncommon to see several filling stations within close proximity of one another. 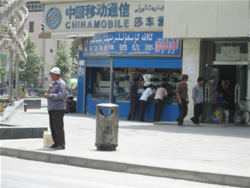 Many kilometers of fiber optic cable have been recently laid across both northern and southern Xinjiang. The paths of these cables have been marked with two-foot high, white-painted concrete markers to prevent construction crews or farmers from damaging them, and these fresh-looking markers parallel both the “southern silk road” and the “northern silk road” routes we traveled. Locals confirmed that these lines had been recently put in. There were also frequent, moderately sized, and apparently newly constructed stations along these new cable lines. I took these to be booster stations associated with the operation of the fiber optic cable. Most of these stations were emblazoned with the “China Mobile” logo. Further testament to the newness of the fiber optic cable network were frequent, and new looking, propaganda signs exhorting people to protect and respect the fiber optic cables (guang xian). Lots of new mobile phone transmission towers also were sprouting, again along both the northern and southern rims of the Takmalikan.

There are many newly constructed school buildings in villages and small towns in Xinjiang. It appeared that much money and effort is going into basic education. Again current propaganda themes suggested as much. “Human talent (ren cai) is the basis for development” was a common slogan on signs and banners.

Large scale exploration and production activity is underway at the Lunnan oilfield east of Kuche. Dozens of pumps were in operation and visible from the highway, reminding me very much of the Oklahoma oil patches I worked as a teenager. Many of the pumps looked very fresh. New wells were being drilled-perhaps a half dozen were visible from the highway, and heavy drilling, pumping, and storage equipment was being moved about over the highways. New storage tanks have been built alongside older and smaller ones. There was intense truck activity to and from storage facilities, although some new pipelines were under construction as well. There was one large, perhaps 18-inch pipeline being laid to, or perhaps from, one of the storage facilities. An impressive, largish, and newly rigged out “Lunnan oilfield base” (Lunnan youtian jidi) was visible and advertised from the highway, apparently to organize all this activity. Over the horizon across the northern rim of the Takmalikan, railway trains of oil tank cars and coal or ore hopper cars moved at frequent intervals.

Preparations are underway to search for petroleum further into the Takmalikan, apparently in the vicinity of the new “Petroleum Highway.” Along that highway were visible three parks of construction equipment, truck-mounted drilling rigs, tanker trucks, and miscellaneous heavy trucks and other vehicles. Some of these motor parks were flanked by tent compounds, apparently for the soon-to-arrive workers. The vehicle parks had a strong military look, but involvement of the PLA was not apparent. PLA men were, however, stringing new power or telephone cables along the “southern silk road” route.

Agricultural machinery was not abundant. There were some mechanical threshers, fans (for winnowing grain), and tractors in the fields, but much more agricultural production seemed to be based on animal or human muscle. People were threshing grain by beating it, winnowing by muscling it into the air, plowing with donkeys, or turning the soil with hoes or shovels. In Kuche a local government bureau concerns itself with agricultural mechanization. They have a rich field for activity.

Interestingly, there were many new grape trellises along both the northern and southern “silk road” routes. Common configurations were long archways leading out from the entrance of houses, or flanking one side of the house. One could ascertain recent construction from both the non-weathered character of the wood and the short size of the grape vines. Many trellises were under construction. 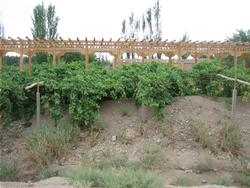 Apparently there is increasing demand for Xinjiang grapes. It may be that the popularity of wine along China’s east coast is creating new demand and, consequently, the expanded supply of Xinjiang grapes. Local demand for grapes might be increasing as well. Over the last several years, Xinjiang Uighurs (most of whom are forbidden by Islam to drink alcohol) have established fruit juice companies that produce high quality beverages patronized by many Xinjiang Uighurs for reasons of ethnic pride. Nonetheless, it seems hard to imagine that all those new trellises are supplying local demand.

Cotton production is another area of agriculture in which there is visible new activity. Cotton is Xinjiang’s major crop. There were several (a half dozen or so) newly built cotton ginning plants where seeds are removed and the raw fiber put in bales for shipment to east-coast textile centers. There was no evidence of foreign or Hong Kong investment in these facilities.

Extensive construction in villages along both the southern and northern “silk road” routes indicates growing prosperity at least in villages adjacent to highways. Houses and walls of unbaked mud and animal manure are being torn down and replaced with dwellings of fired yellow bricks. Hundreds of houses, sometimes whole sections of villages, were being rebuilt in this fashion. Trucks carting new, fired yellow bricks to and fro were abundant. Piles of yellow brick beside houses are as common as newly built houses.

Where does this prosperity come from? It is apparently not from increased productivity due to mechanization. Maybe it comes from the increased production of cash crops such as grapes? From increased government purchase prices for cotton, or reduced agricultural taxes? Aside from grapes, the other apparent cash commodity is sheep, the major item in the fabulous Kashgar animal market. A mature male sheep sold for Rmb 800 (about US$100).

Tourism is another growth industry in Xinjiang. Many new “tourist sites” are being developed. The Han-Tang-era cemetery at Gaocheng outside Kuche has been graced with impressive gates where tickets are sold and brochures handed out, and a structure overlooking the cemetery. A “grape scenery” theme park – with admission only to motor-vehicle-borne tourists-has recently opened in Turpan. The “thousand Buddha caves” at Kirgzil north of Kuche have recently been extensively refurbished with concrete stairways and walkways to bear heavy traffic. At Kashgar, a monument has been recently built to the Han dynasty general Ban Chao and his “36 heroes,” who brought the Kashgar region into the Han orbit.

While there are a fair number of Western tourists, it seems that the overwhelming majority are Chinese vacationing from elsewhere in China. At all of the tourist sites mentioned above, Chinese tourists far outnumber Westerners.

Dearth of Foreign Investment
There was little evidence of foreign investment or other commercial activity by foreign firms: no joint ventures, no advertising, no businessmen bustling about hotels. I saw one Volkswagen dealership and indication of involvement of a French geophysical company in oil exploration. As noted earlier, Mobil is also involved in oil activity. There was also the ever-present Coca-Cola and Pepsi, but not much more. The contrast between this situation and the abundance of foreign commercial activity in lower Yangtze or the Pearl River Delta was striking. It may well be, however, that the impressive improvement of infrastructure currently underway in Xinjiang will lay a basis for greater future foreign commercial interest in Xinjiang.