The relations between China and Southeast Asia have experienced a great leap forward since the 1990s. Bilateral and multilateral level political and cultural exchanges have become more common, and trade volumes have increased steadily. A number of factors have contributed to the latest development. First of all, Beijing has long abandoned its policy of supporting the subversive communist insurgent movement that had troubled many countries in the region. China’s reforms initiated in the 1980s have transformed the leaders in Beijing from being Maoist revolutionary communists to developmental communists. Stability around its borders has been considered absolutely essential to ensure China’s own economic development. Military and financial support to communist insurgents in Thailand, Myanmar, Cambodia, the Philippines, and Malaysia were gradually stopped, thus reversed China’s contradictory policy of maintaining normal state relations at the same time backing the revolutionary groups in each country. This move helps ease the suspicion and mistrust the leaders in those countries had for many years towards China.

Secondly, China is surrounded by major powers in all directions. China has always had concerns over its geopolitical security. The encirclement and containment policy the U.S. implemented during the Cold War is still not entirely gone, and it continues to serve as a constant reminder to Chinese leaders about China’s vulnerability and insecurity. South Korea, Japan and Taiwan are part of the U.S. global defense commitment. Since the end of the Cold War, the two former rivals, the Soviet Union, then later, Russia, and the United States, have indeed shown a somewhat diminished interest in the region, thus creating a partial power vacuum in this region. China has an interest in taking advantage of this shifting international balance of power and will want to expand its influence in an area that had traditionally been a Chinese sphere of influence, at least in the cultural sense. Some scholars in China believe that Southeast Asia can serve as a jumping point for China’s ascendance to great power status since Southeast Asia has become such a weak link in the superpower’s global power projection.

Thirdly, Southeast Asia is of crucial importance to China’s economic security. Southeast Asia stands between the Pacific and Indian Oceans. About 25% of international shipping goes through the South China Sea. As China continues to spread out its trade and global shipment and import more oil from Middle Eastern countries, good relations with the nations in the area will secure one of the key maritime transportation passageways. By 2020, 70% of oil and 50% of natural gas China needs will be imported, primarily through sea transit via South China Sea, from Middle East and other oil producing countries. 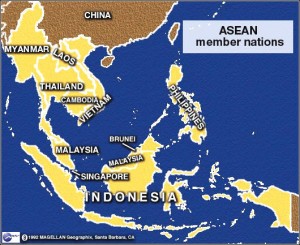 Finally, Southeast Asia is a vital strategic interest to China’s overall foreign policy goals. By establishing closer ties with the region, it can reduce the influence of Japan, the United States, and India. Some believe that Southeast Asia provides the key to the economic integration of the Asian region centered on China. Historically, China maintained a tributary relation with its neighbors that claimed superior political suzerain rights, albeit Chinese rulers more often granted favorable economic terms and treatment to the vassal states. Today, China will have to deal with its neighbors based on international law and the principle of sovereignty and equality. However, China’s unique geographic and demographic characteristics compel China to do more than just being one of the equals. To continue to win its neighbors’ trust, China must play a constructive role of being a stabilizer in the region, and an economic engine which can keep the region’s growth momentum for years to come. Most likely, China will continue to cultivate a big brother’s role in the region, and take a benevolent approach of giving more and demanding less. Indeed, China’s unprecedented efforts to help the troubled ASEAN countries during the Asian Financial Crisis of 1997-1999 and the recent Tsunami disaster highlight this brotherly as well as friendly role China wants to play in the region.

China’s effort to mend relations with its Southeast Asian neighbors took an upward turn in 1990 when China restored its diplomatic relationship with Indochina, the largest country in the region, followed by Singapore and Brunei in 1991. In November 1991, China also normalized its relationship with Vietnam. The two countries broke off its comrade-and-brother relationship after fighting briefly in their border areas in 1979 over the dispute of Vietnam’s invasion of Cambodia. The normalisation of relations with China in 1990 by those Southeast Asian nations acted as a catalyst for more multilateral exchanges, which eventually let to China’s admission into the ASEAN Regional Forum (ARF) in 1994.

ASEAN was established on August 8, 1967 in Bangkok. It now has ten members, and a population of 530 million. In 1991, Chinese Foreign Minister Qian Qishen attended the ASEAN Ministerial meeting for the first time. In 1996 China became a full dialogue partner of ASEAN. In 1997, a summit meeting between ASEAN’s nine countries on the one hand, and China, on the other, was held. It was announced that the two sides established a partnership of good-neighborhood and mutual trust. Finally in 2003, China entered into a strategic partner relationship with ASEAN. The annual ten-plus-one summit meeting between China and the ASEAN ten member states provides an important mechanism for routine high-level dialogues.

Trade between the two sides has reached $100 billion in 2004, a significant increase compared with the trade volumes ten years ago. China has become the largest export destination for ASEAN products. The relative share of ASEAN trade in China’s global merchandise trade increased from 5.8% in 1991 to 8.8% in 2003. Similarly,the share of China in ASEAN’s trade with the world also expanded from 2.3 % in 1991 to 7% in 2003.However, the trade balance has been unfavorable to China with a trade deficit of 16 billion in 2003.

Talks on two major cooperative programs are under way. One is the China-ASEAN Free Trade Agreement (FTA), and the other is the Trans-Asian Railroad Project linking Kunming and Singapore. Although the FTA will not be fully implemented until 2010, the combined common market will rival other similar free trade regions such as the EU and the NAFTA. It has a potential to become the world’s largest free trade area with a combined economic strength of 2 to 3 trillion U.S. dollars and a population of two billions. A free trade agreement for agricultural products has already been implemented between China and a number of Southeast countries. An ASEAN-China joint expert group report indicates that an ASEAN-China FTA will increase ASEAN’s exports to China by 48% and China’s exports to ASEAN by 55%. The report also estimated these increases in trade will increase ASEAN and China’s GDP growth by 0.9% and 0.3% respectively.

China has territorial disputes with many of the countries in the region, especially the disputes over the Spratly Islands. To avoid military confrontations, China has expressed its willingness to solve the disputes through dialogue and peaceful means. It has settled most of the border disputes with Vietnam in recent years, including fishing right disputes in the Gulf of Tonkin. ASEAN and China have concluded a number of agreements ensuring the peace and security of the region and establishing a tranquil regional environment to pursue economic development. For example, ASEAN and China signed the Declaration on the Conduct (DOC) of Parties in the South China Sea in November 2002 in Cambodia, which signalled the mutual desire to promote trust and confidence to establish a regional code of conduct in the area. Nevertheless, the unilateral exploration and development of oil and gas fields in the disputed South China Sea continues.

ASEAN and China concluded a Memorandum of Understanding (MOU) in the Field of Non-traditional Security Issues in November 2002 in Cambodia, which sets the stage for substantive cooperation in the field of combating trans-national crimes, including terrorism, drug trafficking, sea piracy and trafficking in persons. An annual plan to implement the declaration was agreed to by both sides in January 2004 and efforts are underway to implement concrete cooperation activities. In 1990 ASEAN and China on a Joint Regional Plan to Achieve a Drug-Free ASEAN by 2015. China, Thailand and Burma reached agreement to jointly launch an anti-drug war in the Golden Triangle region. Information sharing and extradition are carried out. China has set up special fund to help opium growers in neighboring Laos and Myanmar to grow agricultural crops.

A Partner, not a Threat 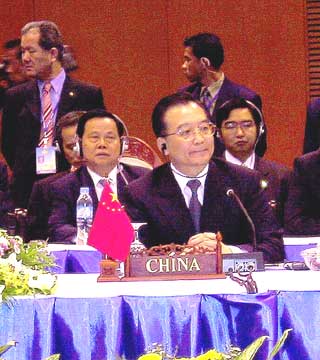 There is no doubt that China and Southeast Asia have entered a period of peace and cooperation in their bilateral and multilateral relations. However, the rise of China as a regional and global power will cause some uneasiness among its southern neighbors. Some leaders have clearly echoed the sentiment of “China threats” that are shared by many in the West. Some worry that China is carrying out its own Monroe Doctrine and trying to play a dominant role in this region. Others see the rise of China more as an opportunity. According to Ong Keng Yong, the Secretary-General of ASEAN, “a rapidly growing China is the engine which powers regional economies and the global economic train.” He believes that increased trade with China was one reason why many of the crisis-hit economies in ASEAN recovered as quickly as they did.

ASEAN’s economic dependency on China has grown over the years. China’s growing economy has had a major impact on the economies of each country in the region. Many countries not only have benefited from the access to China’s huge market, but also from the political and financial support they receive in times of crises. During the Asian Financial Crisis, China showed strong solidarity with its southern neighbors. It resisted the pressure to devaluate its own currency, thus avoiding the worsening cycle of capital market collapses in the region. Additionally, China lobbied hard in the International Monetary Fund (IMF) on providing substantial, low-conditionality funding packages for the troubled Asian economies. China supported a larger and quick relief financial package with more front-end loaded disbursement and lower conditionality for Thailand. China also helped ease the rigid fiscal constraints placed on the Indonesian aid package. In addition, China made sizable financial contributions to these aid packages. When the tsunami hit hard on many ASEAN countries in December 2004, the Chinese government responded promptly by launching the largest foreign relief operation in the country’s history. Pledges from the government sources eventually reached US$83 million, and civilian donations also reached a record of US$53 million.

Cases like the Asian Financial Crisis and the tsunami disaster relief have demonstrated the positive and constructive role China can play. As China’s economic growth continues, China’s importance to this region will continue to increase. The long-term prospect for China-Southeast Asia relations remains to be positive. The economic integration will be accelerated in the years to come as the FTA is gradually finalized. The two sides will be partners on many issues, and competitors in others. But the balance of power is inevitably becoming more in favor of China.