Less than a month after retiring, former Georgia Tech environmental scientist C.S. Kiang was named dean of the newly established College of Environmental Sciences at Peking University, one of China’s most prestigious schools. He is the first foreign dean. Kiang said his wife, Marilyn, owner of Kiang Art Gallery, and their two daughters will remain in Atlanta while Kiang “commutes” to work in Beijing, coming back home every six weeks or so. 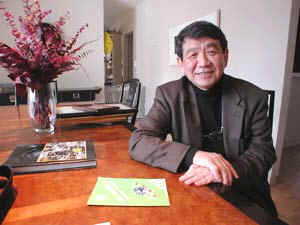 Kiang is no stranger to China — he was born in Shanghai in 1939 but grew up in Taiwan. He speaks four Chinese dialects fluently. After receiving a bachelor’s degree in physics from National Taiwan University in 1962, Kiang came to Georgia Tech for graduate work, eventually earning a master’s and a doctorate in physics. While a student at Tech, a narrow brush with death shaped his future.

“In 1964, I learned I and another Chinese student had tuberculosis,” Kiang said. “I lived and he died.” Kiang said he was saved by the actions of Vernon Crawford, then the associate director of the School of Physics. Crawford, who later became chancellor of the Georgia Board of Regents, drove Kiang to Rome, Ga., and admitted him to a state hospital that specialized in the treatment of TB.

“After that I stayed with him and his wife, Helen, at their home for a year,” Kiang said. “They took care of me. They even paid my medical and school bills and never asked for anything back. Later he said that he was adopting me as his ‘Number One son’ since he had two daughters.”

After earning his doctorate in 1970, Kiang worked at the National Center of Atmospheric Research in Boulder, Colo., until 1978, when Crawford asked him to return to Atlanta to develop and direct Tech’s Atmospheric Sciences program.

“I was very happy in Boulder,” he said. “But when Dr. Crawford called, I came back. Up until his death, he always said, ‘Please, don’t leave.’ That’s a significant reason why I stayed at Tech for the rest of my career.”

Kiang was the first director of the Office of Environmental Science, Technology and Policy, and was a founding director of the Southern Oxidant Study, an alliance of government agencies, national laboratories, academic institutes and private industries studying air quality in the southern United States.

China’s environment has suffered in the past 20 years from rapid development. Its cities are some of the most polluted in the world, which could present a major threat to continued economic growth. Kiang hopes his ideas will promote solutions to those environmental problems.

“This is a chance to do something with global impact,” he said. “I think my theme over there will be ‘what China can do for the world.’ I want to emphasize that if China’s environmental resources can be sustainable, then China can help the world. The college at Peking University will not just be concerned with ecological issues. We will also offer urban and regional planning, environmental geoscience resources and environmental design. We may be the first college in the world to look at the environment holistically.”

Kiang said China’s environmental situation is much more immediate than the United States. “Take, for example, Atlanta’s water resources,” he said. “We still have enough, but 30 years from now, our supply will be met with demand. China has to deal with those situations now — they don’t have 30 years. Smart growth in China is a necessity and if they can do that, then they can offer help to other developing countries in South America, southeast Asia or Africa.”

State economic leaders consider Kiang a critical link between China and Georgia. He has served as an adviser to U.S. companies entering China since that country established its open door policy in the 1970s and was one of the founders of China/Tech, a joint high-technology information exchange program. Kiang is confident China can handle environmental growth as well as it has handled economic growth.

“Americans think China is very slow to change, but that’s not a valid assumption,” Kiang said. “For the past 20 years, China’s economic growth has been historical. They developed economically in 20 years what took the West 200 years to do.”