The recently concluded 16th Party Congress of the Chinese Communist Party (CCP) could well become another major milestone in China’s political history. It elected a group of younger party leaders, endorsed the theory of “Three Represents” advocated by the former Party General Secretary Jiang Zemin, and declared an ambitious plan for China’s economic development for the next twenty years. However, the Congress failed to launch major new initiatives in the much-anticipated political reform. The re-election of Jiang Zemin as the Chairman of the powerful Central Military Committee also casts a shadow on the real power of Hu Jintao, the newly elected Party General Secretary. 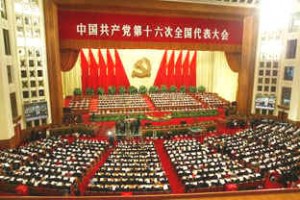 For over fifty years, the unpredictable power transfer due to the informal nature of elite politics has troubled the CCP deeply. Rarely has the handpicked successors survived the political onslaught as a result of the fierce inner-party power struggles. Jiang Zemin’s ability to hold on to his power for the past thirteen years is indeed an impressive triumph. This success has laid a solid foundation for political stabilization and institutionalization of the power transition process. If nothing else goes wrong, the 16th Party Congress will mark the beginning of institutionalized power transfer, an unprecedented accomplishment in the party’s 80 years’ history. By March 2003, the newly selected members of politburo and the Party Central Committee will formally take over key state posts, thereby, formally completing the transition process. The new General Secretary Hu Jintao is expected to become the President of the People’s Republic of China (PRC), Wu Bangguo will succeed Li Peng as the new Chairman of the National People’s Congress (NPC), and Wen Jiabao will assume the premiership next March.

Almost all of the newly elected leaders were relatively unknown at the beginning of the reform era, and have gradually established their credentials through their long-time service at the grassroots level. To what extent their thinking will differ from that of their predecessors’ remains to be seen. But with the older leaders still behind their shoulders, one should not expect any major breakthroughs, at least not for the foreseeable future. Instead, the priority for the new leaders is to emphasize continuity and adherence to the existing party line. Hu’s style will differ from Jiang’s, as he has demonstrated in recent appearances. But he is not likely to become China’s Gorbachiev or Putin either. It is not likely that Hu will become China’s next strongman or charismatic leader. 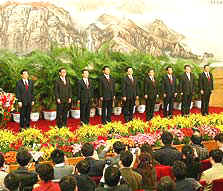 Another significant change made during the meeting is the inclusion of the theory of “Three Represents” in the Party’s constitution. The theory calls for the party to represent “the advanced productive forces, advanced culture, and the fundamental interests of the overwhelming majority of the Chinese people.” Many people consider the theory to be the most important political legacy of Jiang Zemin. It indicates the willingness of the Party to adapt itself to the changing environment. The theory represents a major revision to the theoretical framework of a Leninist party the CCP has been accustomed to. Does this indicate a new beginning for the party? Will the CCP become a social democratic party? It’s too early to give a definitive answer to these questions. It appears the immediate concern of the party is to rebuild its base of political legitimacy, and consequently, strengthen its monopolistic grips over political power. In the past, the party has gained social support and political legitimacy through an alliance with industrial workers and rural peasants. As the economic and social system is under a rapid transformation, these two social classes are increasingly being undermined. The declining social status and the sharp rise of unemployment rate has tuned many workers and farmers into strong opponents of the economic reform. They have begun to stage protests in many shapes and forms. To avoid a crisis of legitimacy, the party realizes that it must broaden its social base and change its anti-capitalist stance. Indeed, the party has decided to open its door for private business owners to become party members. Many analysts argue that the party has formed a new alliance with intellectuals and business elites to ensure political consensus. Some even predict that the party will soon become an all-people’s party.

The Party Congress also sets the nation’s developmental goals for the next two decades. It intends to raise the standard of living of the Chinese people to the level of average middle-income countries. To achieve these goals, China will have to quadruple its GDP in the next two decades, and maintain a seven-percent annual GDP growth rate. The on-going adjustment of economic structures and regional development is much more difficult and painful than reforms carried out in previous decades due to the complexity of the issues involved. China has increased its GDP eight times since the beginning of the reform in 1979. Its huge domestic market, an envy of the world, will probably be able to sustain such growth. The promised economic growth will bring about a new middle-class. This new social class may become a pivotal political force driving China’s future political development. Unlike the economic reform that was engineered mostly from top down, one can predict that China’s future political reform will most likely be pushed from the bottom up.

Overall, the 16th Party Congress was a success. It produced some promising results. The election of a new generation of reform-minded leaders marks the establishment of a system of institutionalized power transfer. The backing of a progressive new political theory by the deputies of the Congress signals a possibility that the party is ready to reform itself. The adoption of the ambitious economic growth plan will rejuvenate more than a billion people to strive even harder for the country’s greatness. Moreover, a more prosperous China will create a new middle class as large as the size of the entire population of the United States, and its rise will bring hopes to China for more political freedoms. All of these are clear signs of a new beginning for China at the dawn of the new millennium. It adds more excitement over what has already been an exciting year for China. Nevertheless, one should always be cautious in making predictions about China’s future. Events can take dramatic turns if the new leaders cannot adequately address some of emerging problems such as the rising unemployment rate, and the worsening situation in income disparity. We need to wait a little longer to assess the real impact and achievement of the 16th Party Congress.